Independent engine maker Cummins Inc. supplied the most Class 8 diesel engines overall in 2018, and set a record for its heavier-displacement units used in one of the strongest years on record for new truck demand, WardsAuto.com reported.

“It’s long been said that Cummins competes against all of its customers. We know they can make diesel engines,” Brett Merritt, vice president of on-highway engine business, told Transport Topics.

“Our job is to scale them better, to provide a broad product breadth that they may not have, to give the end customer a choice and to help our OEM customers continue to sell trucks. Our goal at the end of the day is sell trucks,” he said.

The figures come from a Wards report on North American factory sales of heavy-duty trucks, including their engines, released Feb. 1.

The report breaks Class 8 engines into two segments, with 10 liters as the dividing line.

More of its X15 engines were used, Merritt said. “It has been showing fantastic fuel economy and has been known for a long time for durability.”

He added, “The ISX12 had a pretty strong year for its history.” 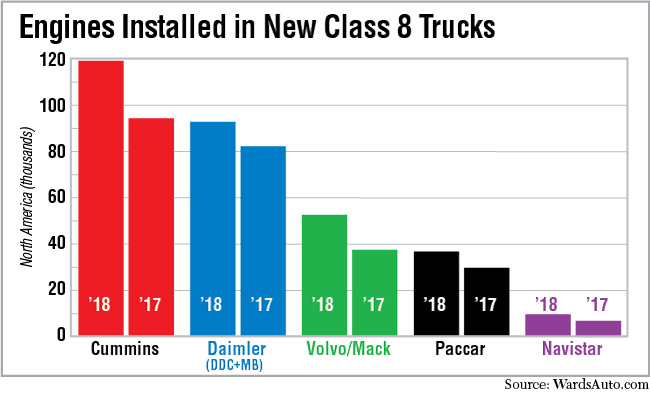 MB had 11 engines used in the heavier segment, down from 818 a year earlier.

The scope of the report that Wards publishes is North America, including sales to Mexico, a spokesperson for Daimler pointed out. “Our numbers that we submit to Wards exclude Mexico volumes, hence they are incomplete for North America. This has been in effect since November 2017.”

Meanwhile, Kenworth Truck Co. and International were Cummins’ two largest customers in the heavier segment — accounting for 35,590 and 30,880, respectively.

Paccar CEO Ron Armstrong said in a recent earnings call the company was increasing investments in machining in 2019 “to support the success of the Paccar MX engine and just to continue to increase the efficiency of all of our factories around the world.”

Ultimately, having more engines used leads to more parts for service and repair, “which typically have a little bit higher-than-average margin,” Armstrong said. At the same time, International and Volvo Trucks North America posted the largest percentage increases in the heavier segment in 2018.

“We’ve actually doubled the number of engines sold in the on-highway market and are just starting to see growth in the vocational,” Gilligan said.

“I think it will still be a fairly large part of the industry; 26,000 engines is still pretty large and a good focus for us,” Merritt said.

Freightliner, also a DTNA brand, was its largest customer, with 14,345 engines.